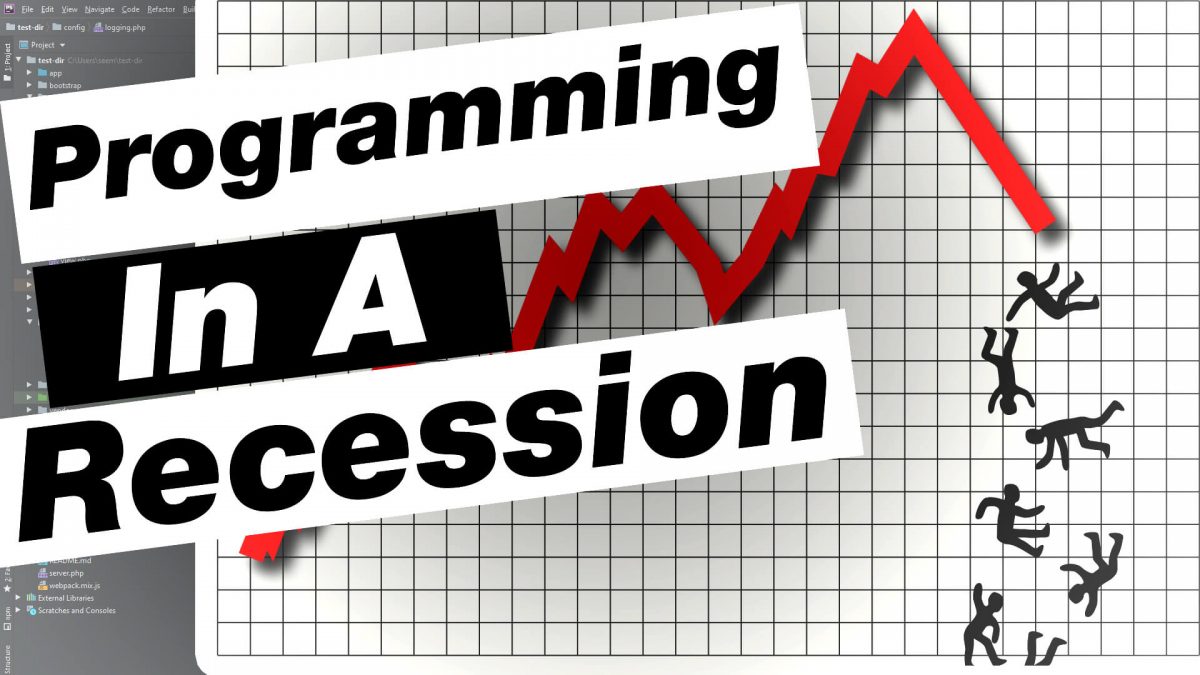 Today I want to talk about what it’s like to be a programmer during a recession.  With all of the recent stock market movement in the red, it just might be something that you need to prepare for. Checkout the video or continue reading for more information.

Hi guys, this is Nick from Mobile Code Media.  Now, this video is a response to Chris Hawkes’ video on “Programming In a Recession.”  I think he made a lot of good points in his video, but I wanted to give you my take on the subject.  1st off, bear markets are part of a normal market cycle and when they happen, it’s because something is overvalued and it needs to drop back to where it belongs.  It’s normal for this to happen, just like it’s normal for you to go to sleep. REM sleep is when you heal and bear markets are where things re-adjust back to reality.  Secondly, I’m not a financial advisor. I’m a computer programmer that is just giving you my own opinion on what I think will happen and how it will affect you as a programmer, especially since I was in the field during the 2008 recession.

Nothing was fixed from the 2008 recession, we simply borrowed more money to prevent pain.  As you can see from the US debt clock, we’re sitting over $23 trillion in debt, which has more than doubled since 2008:

This doesn’t even take into account the unfunded liabilities like social security and pensions.  All that money those people put in got spent already. People working now are paying for the older generation that already spent their money:

Let’s define what a recession is.  A recession is a fall in GDP in two successive quarters.  The problem with that definition is that it means a recession is a trailing indicator…you won’t know that you’re in one until two quarters have passed.  Meanwhile, the news can be telling you everything ok, go spend spend spend. 70% of the US economy is consumer driven, so if people aren’t spending, then it will affect it greatly.  People are maxed out on debt:

People don’t really buy things, they buy payments.  They’ll tolerate paying monthly payments into perpetuity, so long as they get the stuff that makes them look cool.  But the problem is that people are maxed out on what they can afford monthly. They’ve also got no savings:

After the dot com crash, interest rates were dropped to 0% to spur the economy. The problem with doing that is that it creates asset bubbles, but it prevents pain in the now.  That’s how we get crazy expensive sneaker collections, $3,000 comic books, and a crazy housing/stock market. Nobody is making money in a bank account, so they go bid up assets to try to get a return that way. Or they get into high yield, otherwise known as high risk, investments, in an attempt to get a return on their money.  So super low interest rates are like taking antibiotics…you can’t do it forever or you’ll really be sorry. At best, it’s something you may be able to do in the short term.

During the dot com crash, I wasn’t a professional programmer.  I worked on the web a little back then, but I would hardly call myself a programmer and I hadn’t even started college yet.  I remember former programmers working at the front counter at AMC theaters after it got going. Everything had gotten overblown cash wise, and the market needed to correct itself.  Only programmers that could keep themselves relevant in the marketplace were spared.

I graduated college with a BS in Computer Science right before the 2008 recession got started, and I had just gotten into the field.  I remember a lot of companies laying people off…that’s how we ended up getting the 99 weeks of unemployment approved. Best case, companies went on a hiring freeze.  Some places were making their employees take “haircuts”, or were letting them choose between laying 1/10 off, or everybody taking a 10% haircut. I remember I saw a job pop up in Yuma, Arizona.  It was paying like $45K per year. I applied to it and got an email back from them stating that they had been flooded with applicants and were closing the job.

So a recession is coming, eventually.  Is it now? Who knows. We’ve been in a bubble for way too long and the longer we wait, the more painful it will be for that bubble to deflate.  Get prepared now by upping your skillset, making sure that you have multiple streams of income, like a side hustle that’s making money, and keep your contacts up to date.  It’s super important to make and keep good professional contacts, as your network might be able to help when times get tough.

Most of these things are out of your control, so just focus on what you CAN control.  You don’t control the stock market, the housing market, the bond market, or the job market.  But you can control your programming skills by learning more, making more of an effort, and keeping your skills up to date.  You can control what you put in your mouth. You can control how much you exercise. You can control what you focus on. Make sure that you’re doing what you can to keep your stress levels low and make sure that you’re taking care of the things that you can control.  I’m not exactly where I want to be and I’m working on getting there. If you’re constantly learning, then you’ll always be a work in progress and that’s a good thing. Progress is what makes us happy, if you’re better this year than you were last year.