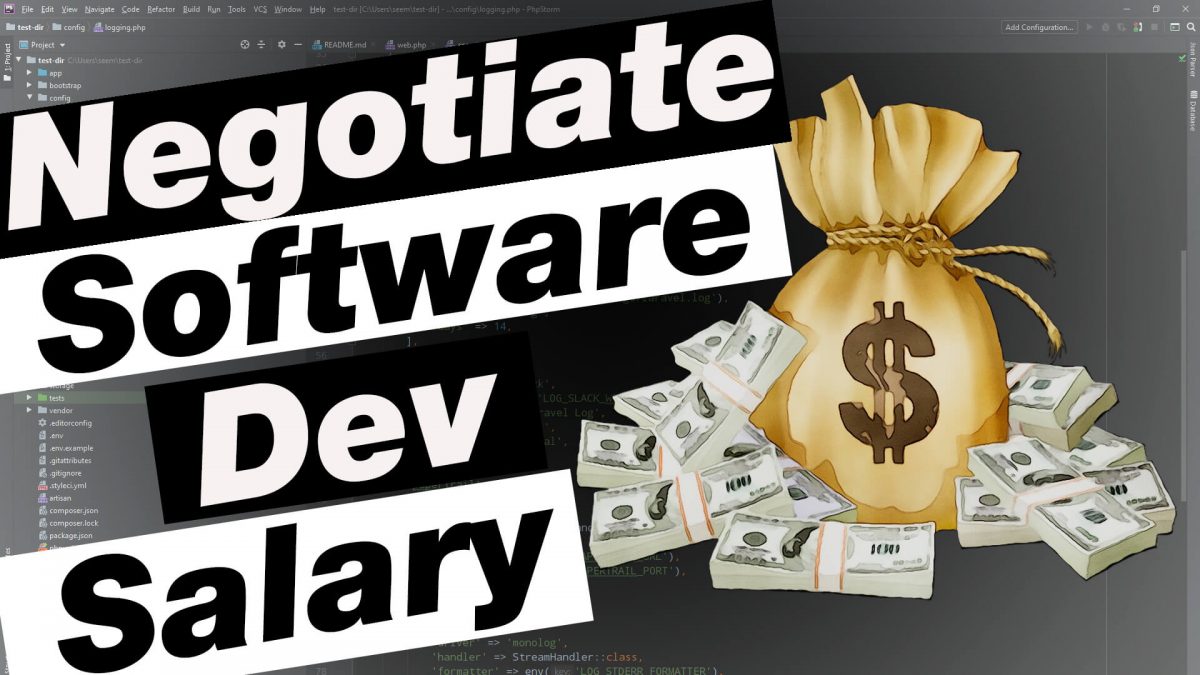 Want to find out how to negotiate your salary as a software developer? Checkout the video below or read the transcript to find out more.

Hi guys, this is Nick from Mobile Code Media. So today I want to talk about how to negotiate your salary as a software developer. I want to add a disclaimer here that I’m going to speak in GENERAL TERMS. I don’t know your exact situation and I don’t know you personally, so I can only speak generally.

This may sound obvious, but it’s important to point out why companies hire help. THEY HIRE HELP TO SOLVE A PROBLEM. They don’t hire help to give you experience. They don’t care if you’re fresh out of school and lack experience, but just need a chance. They want to hire the best person that they can afford for the job. Sometimes companies will hire somebody that has potential, but that’s only because they can get them for a cheaper price and they see the person adding more value than their salary costs. It’s a cold equation, just like when you toss a bone onto a group of wild dogs. The dogs will figure out, one way or another, who gets the bone and who doesn’t. So don’t take any of this personal, it’s just business. If you find yourself not getting interviews, then something is off and you need re-evaluate. You might come off as arrogant, difficult to work with, or not knowledgeable enough. You may need to ask for help with your resume or skill set if that’s the case.

There are a few ways that you’ll generally land a job as a developer. It will usually be through a recruiter, a job posting by the company, or a referral from somebody that you know. If a recruiter contacts you about a job, a lot of times they’ll be desperately looking for somebody to fill the role, since they’re trying to beat out other recruiters from other companies that are trying to fill the same job. Whenever they contact you, make sure that you carefully look over the job description, including where the job is located and if you’ll need to go into the office everyday. Don’t let them rush you and don’t give recruiters more information than you need to. The recruiter will tell you that it’s in their best interest to get you the highest salary possible, because they get a cut of that, but you have to look at the whole picture. The client is the one paying the recruiter when they fill the position, and you don’t pay a dime.

You have to follow the money. The recruiter is only getting a percentage of what you’ll make for the year, and the recruiter is going to factor in whether the client will ask them to fill more positions down the line. It pays for them to remain in good standing with the client for future work. A bird in the hand is worth 2 in the bush. If they can get the position filled asap, then they can get paid and move on to working on filling another position asap. So in the end, the recruiter’s job is to get the position filled as quickly as possible so they can get paid. They’ll take a little less money if it means their client paying them is happy and likely to need position filled in the future. If you don’t believe me, think about the questions that recruiters tend to ask. Right off the bat, they’ll ask what you’re making now and what you’re looking to make. They want to find out the minimum amount of money that you’re willing to show up consistently for, or at least you’ll consistently show up long enough for them to get their money.

Before you talk to anybody about how much you’re looking to make, find out what the market value is for your skill in your area. If you’re a front end developer, look up what front end developers make in your area. Check multiple sites and come to a salary range. Replacing skilled labor is very expensive, so companies are going to try to make sure that they’re not making a mistake hiring you.

Before I get into tactics, I want to finish explaining leverage. Remember that a company does not need you specifically, they need somebody who can solve their problems. They don’t know you and they don’t care about you, yet. They want to pay you the minimum amount that you’ll be happy with and show up on time for. Unless you possess some rare skill and the company is desperate, then you need them more than they need you. You are a cog in their machine and when a cog breaks, they generally replace the cog with a new one and move on. Again, it’s not personal, it’s a business and it needs to make a money or it eventually ceases to exist. It’s worried primarily about self-preservation. So again, no matter who you’re talking to, know the market rate for your type of labor in your area. If you’re a front end developer, know that salary range in your area. Always ask what the salary range is for the job that you’re applying for, if it’s not listed. The person that gives out a number first is the one that has lost some leverage. Wouldn’t that suck if the job was budgeting for $95K, but you said you’re looking for $70K? They just got a deal.

Often they’ll force a number out of you, because, remember, you need them more than they need you. At that point, you should say what the salary range is in your area (assuming it’s a local job). If it’s a remote job, try to either match the labor costs in your area or where their office is located…whichever is higher. Giving a number is delicate though, because you can’t come in too high or they’ll just stop considering you. So it all boils down to researching market rate for your area. Try to avoid telling them what you make right now. What you make right now is irrelevant, because you’re looking for market rate. Recruiters are generally the only ones that ask what you’re making now, and I’d avoid telling them if possible. Remember, they’re trying to find your bottom dollar and they do this for a living, so they have more experience at this than you do. They’ll often say something like “I just want to make sure I’m putting you somewhere where you’ll be happy.” Just refer them back to your RESEARCHED market rate and you’ll be happy there.

Hopefully at this point, you’ve gone through a phone interview, a code challenge, and an in person interview. Let’s say that the company gives you what you’re asking for. If they do, you should say thank you and accept. This is why your number needs to be researched before your throw anything out there. If they give you what you’re asking for and you ask for more, you’re going to look like a pig. You’ll look like a mercenary that will run to whomever is paying more, leaving them high and dry. Do your research before you throw out a number or a range.

On the other hand, the company has made you an offer and it’s short of what you were asking for. Let’s say you were looking for $60K and they came in at $50K. The first thing that you want to do is thank them for the offer and you have to sound sincere. You would say something like “Wow, thank you very much for the offer. I think you guys have got a great organization and a great team, and I know that I can bring a lot of value to your organization. However, I was wondering if you might be able to do a little better or come up to my asking price. I feel that I’ve researched the rate for .” You need to come off as thankful that they’re considering you, but don’t be afraid to ask. You might worry that they’ll get angry if you ask, but do you really want to work for a company that’s going to be angry that you stood up for yourself? If they get defensive, I’d run for the hills. It’s just business and they know the game. They shouldn’t take offense to you asking for market rate if you do it politely. If they do take offense, then decline the job because this isn’t somewhere that you want to depend on or work. Take it as a red flag and move on.

Make sure that you’re interviewing at a couple jobs at the same time, but keep it a secret until you can use it to your advantage. If you get multiple offers from different companies, then you can pick the one that best suits you. Recruiters will ask if you’re looking, but don’t tell them that you are. They’ll often stop returning your calls if they think you’ll be a waste of time. Play your cards close to your chest. No matter what a company tells you, a company can only show love in the form of compensation. Not titles or promises that aren’t written down and signed. No matter what they tell you, your paycheck reflects how they feel about you. If you’re going to factor bonuses or other compensation into determining which salary you’ll accept, remember that if something isn’t written down, then it never happened. If they’re unwilling to write on paper that you’re getting a bonus, then you can’t factor it in, because it’s not a promise that you can prove and therefore can’t be factored in. Often times companies will cancel bonuses if they’ve had a bad year or just don’t feel like it.

Good luck on your next job search and I hope that you found these tips helpful.